The Boss Monster is a very powerful enemy in the first Zombotron game. Two also appear in Level 10 of Zombotron 2. They can shoot fire balls from their mouth. There are three boss monsters: Pink boss and Grey bosses.They are cousins but that is not confirmed, The older cousin is the Pink boss, and the younger cousins are the Grey bosses. They are bear/kangaroo-like mammals, with horns on their head and bony spikes on their back.

The Boss Monster in the first Zombotron game is pink colored. It is the most powerful enemy encountered in the first game. It is found in the last level and when defeated, gives the player a ton of coins and the game is over. The Pink Boss Monster is the leader and boss of all monsters; though it is weaker than the war machine.

Two grey colored boss monsters appear in Level 10 of Zombotron 2. They have the same power and abilities as the pink one. They are the leader and boss of all monsters 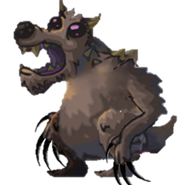 A photoshopped version of the fat boss
Community content is available under CC-BY-SA unless otherwise noted.
Advertisement